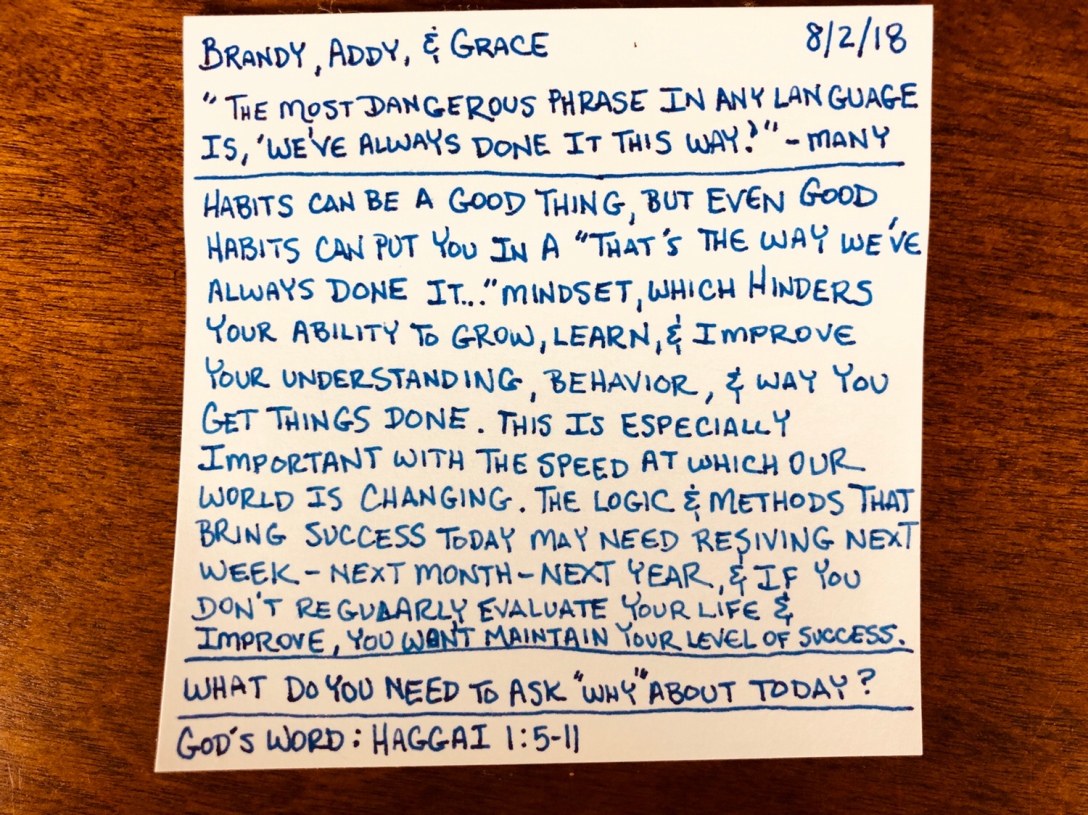 The most dangerous phrase in any language is, ‘We’ve always done it this way.’ – Many People

Habits can be a good thing, but even good habits can put you in a “This is that way we’ve always done it” mindset that hinders your ability to learn, grow, and improve your understanding, behavior, and way you get things done. This is especially important with the speed at which our world is changing. The logic and methods we use today might need revising next week – next month – next year, and if you’re stuck in a mindset that doesn’t allow for regular periods of evaluation and improvement, then you won’t be able to maintain your level of achievement.

Zig Ziglar told a story about how his wife always cut off the end of the ham before she baked it. One day Zig asked his wife, “Why do you cut the end off?” She replied that that’s the way her mother cooked ham, so she did it the same way. Wanting to get to the bottom of this, Zig asked his mother-in-law the same question, and he got the same response, “That’s the way my mother cooked it.” Not to be deterred, he continued down the trail to his wife’s grandmother, and she said, “Well, I used to only have a small pan, and I had to cut the end of the ham off so it would fit in the pan.”

My girls, the problem isn’t that the grandmother did what she had to do to make something work with the resources (the pan) she had at the time. The problem was with the daughters who had the resources to do the job more efficiently, but they needlessly wasted their materials (the end of the ham) and added a step to the work process (the act of cutting off the end) because they never questioned the method. Now translate the end of that ham to what we do in making or spending money or just generally living life and you see why it’s essential to periodically ask, “Why do we do it like this?”

Challenge Question: What do you need to ask WHY about TODAY?

Helping you define and achieve success. View all posts by Jesse Hardy